You wake up from the increasingly loud roar of water, and the loud voices of your tribesmen.
You realize the village is soon going to be underwater, as what seems like the entire ocean is continuously gushing out from behind the mountain range, close to the plateau where your village is located.
The village elder is standing at the campfire in the middle of the village, urging everyone to beg the gods for mercy and forgiveness, up in the mountain range to the north where the gods are said to live, to hopefully be spared.
This is a very risky proposition as those mountains have been sacred, and off limits to everyone, for as long as you have lived.
But as this is you and your tribes only chance to survive, and because you see nowhere else to run, you enter the darkness of the caves and move your way up the mountain…

“The flood” is a level where I focused on creating a sense of adventure and wonder in a cave-like environment.
It is not necessarily meant to be part of the regular Fallout universe.
So where is this happening?
On earth?
On another planet?
Are you living in the past, or is this the future?
But why in that case is your tribe’s technology so rudimentary?
Are you in “our own” actual universe, or in a completely different one?
I also wanted to get the player wondering about what the cave system in this level really was and how it had come to look this way, but also based upon this, a curiosity of what might be coming next! 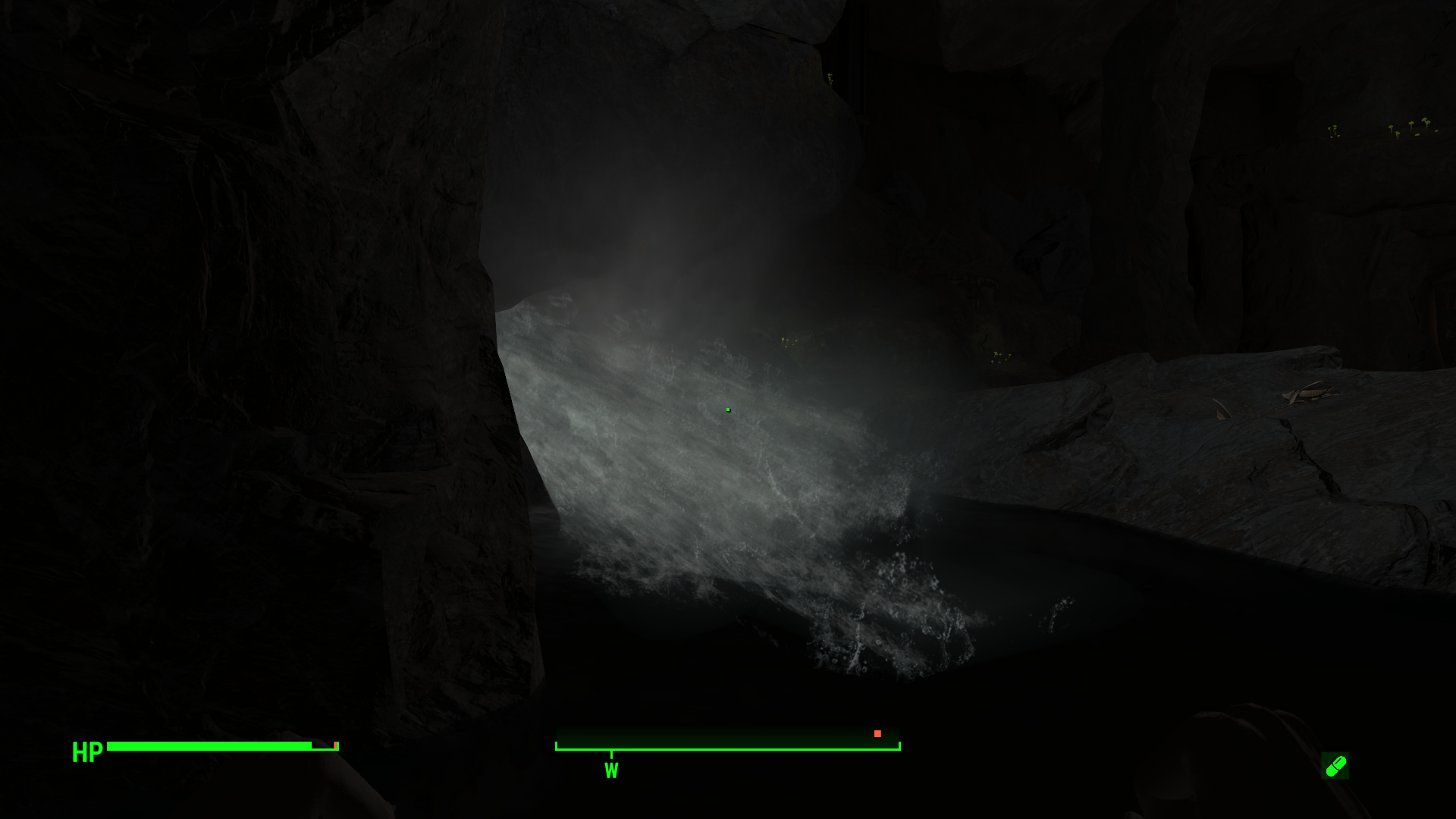 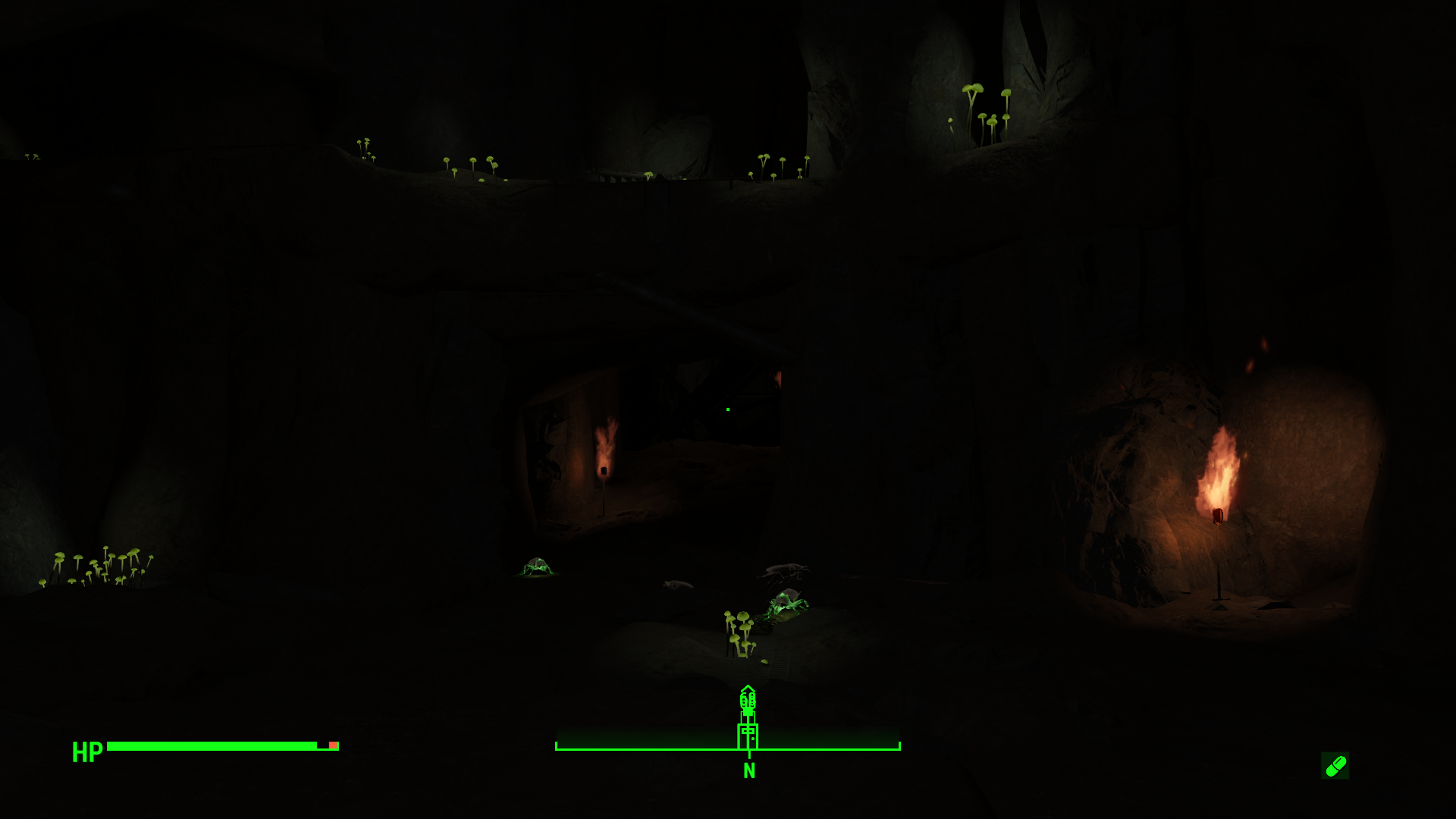 You run through narrow tunnels, randomly choosing which path to take until the water catches up with you and pushes you forward into a great hall of some kind.
Water is now rushing into the cave, and the water level rising steadily.
You explore the room, but the rising water pushes you forward.
Passing under what looks like some kind of walkway you can see what appears to be part of a railing up above.
A shaft filled with fallen and rusted steel beams greet you after a short slope upward.

You take a right turn and run into the village elder.
His wagon is tipped over and he has a manic expression on his face.
– The eggs!
– This damned cart, it broke!
– Get them back for me… for US!
– Don’t you see?!
– Without them we have no food, they were meant to sustain us for a week at least!
– We can’t go on without them, you have to help me!

One of the eggs have cracked against the cliff wall and the yolk is smeared across the side of the wall, the others must have fallen down into the water filled shaft.
You can only hope the rest didn’t crack when they hit the bottom…

You jump in, and dive through the thick muddy water to the bottom to pick the eggs up.
One of the eggs at the bottom are cracked, so you swim toward another one, when all of a sudden something bites your leg and you scream out loud, forgetting you are under water.
You look down and see the shelled creature attached to your leg, with its beady eyes looking straight at you.
You feel the air in your lungs depleting and in a panic you grab a rock from the bottom, rip the creature from your leg and smash the rock into the creature’s soft belly.

You swim up for air, and then continue to gather the rest of the eggs from the bottom.

When you’re done the water level has risen with several feet, and the village elder is gone.
You consider throwing the eggs away but think twice about it, and start to move toward higher ground. 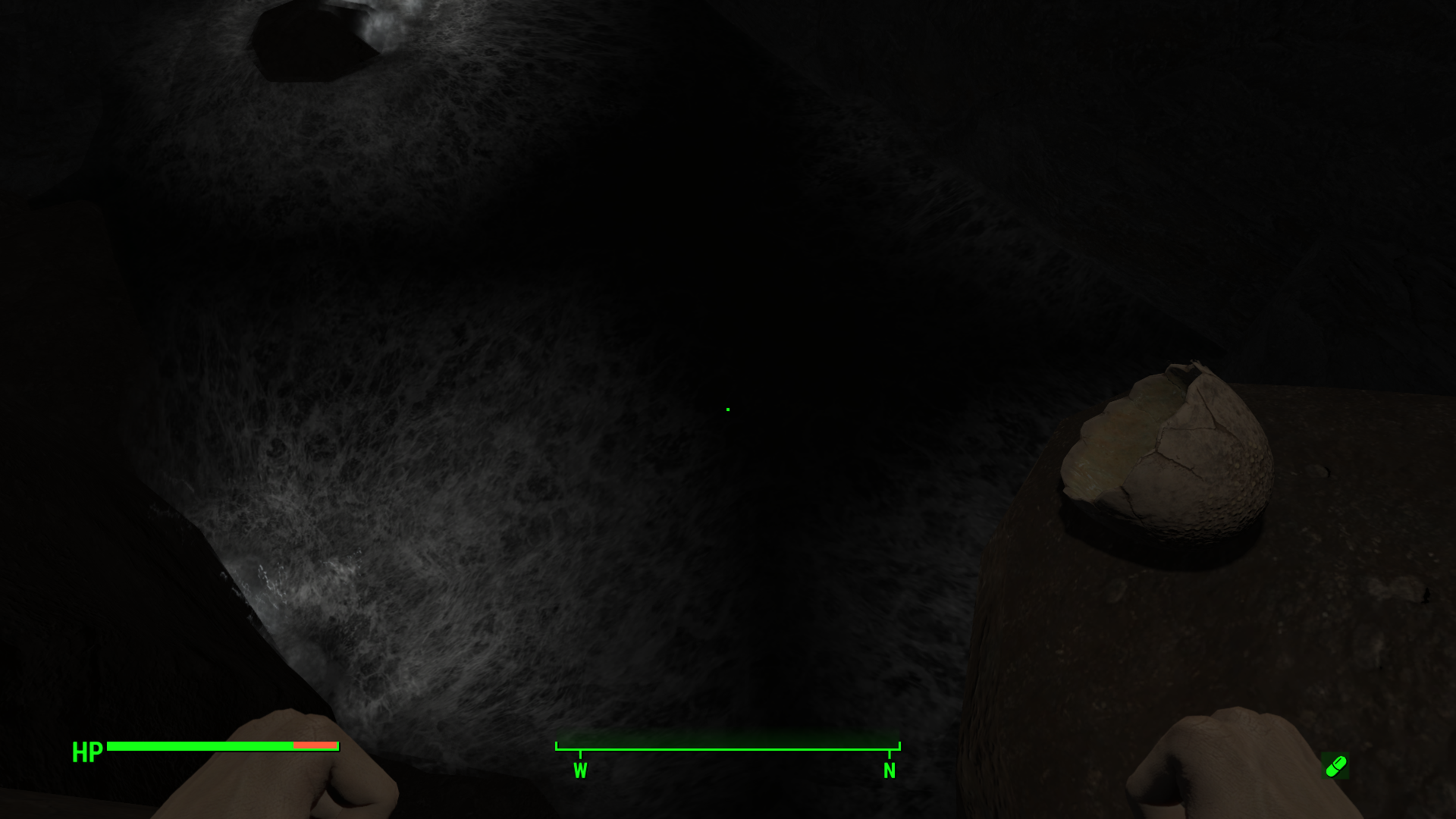 Eventually you get to a room connected to the shaft you saw when you first entered, and by now the water level has almost reached the room you’re in.
You turn your attention toward the door, as the few villagers that have managed to get this far are unable to get it to open.
It’s unlike any door you have ever seen, with a white hard surface.
You try to pry it open, and a demonic voice from inside the wall suddenly says,

What does that mean?
“Keycard”… must be some kind of key you assume.
You look down, thinking about kneeling in front of the door, just in case it is not just a door, and you see a sign that seems to have fallen off, saying “Exit”.
There is however no keyhole, but instead some kind of slit on the side of the door.

You look for something to bend the door open with and a light catches your eye from across the room.
A skeleton is lying next to the glowing item, with its arm trapped under a huge box…I guess you found the owner of what appears to be a keyring.
You grab the glowing keyring, hoping it is somehow connected to the door.

A keyhole on the locker that has fallen over beside the white door seems to match the size of the key, so you try to open it, hoping for the best.
It opens and reveals a card, and a shovel.

You grab only the card, thinking that if you need to dig your way out later you know where to find your shovel.

The same demonic voice from inside the wall speaks again…

The door slides open and you’re greeted with the deafening roar of water, and a dark chasm that is quickly filling with water.
There’s a small walkway across the chasm which you cross before the dark and slippery water swallows it.
You see what looks like moonlight coming from an opening in the cave wall, and you pray for it to take you to safety.
The few people that were waiting in front of the now opened door carefully follow you, and you find yourself on a narrow cliff ledge on the outside of the mountain, with the thundering waves trying to reach you from below.

There’s no choice but to keep going up… 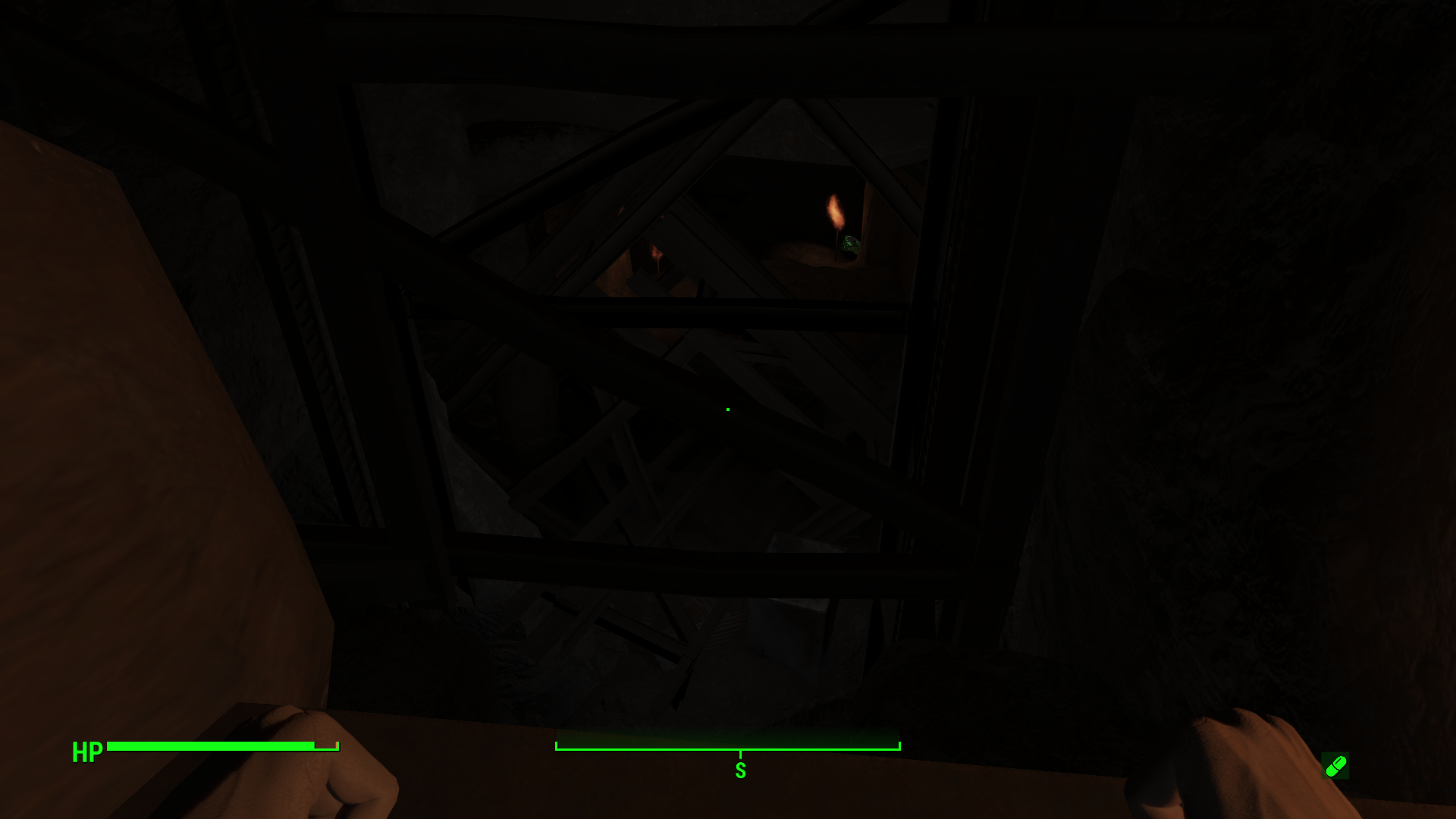 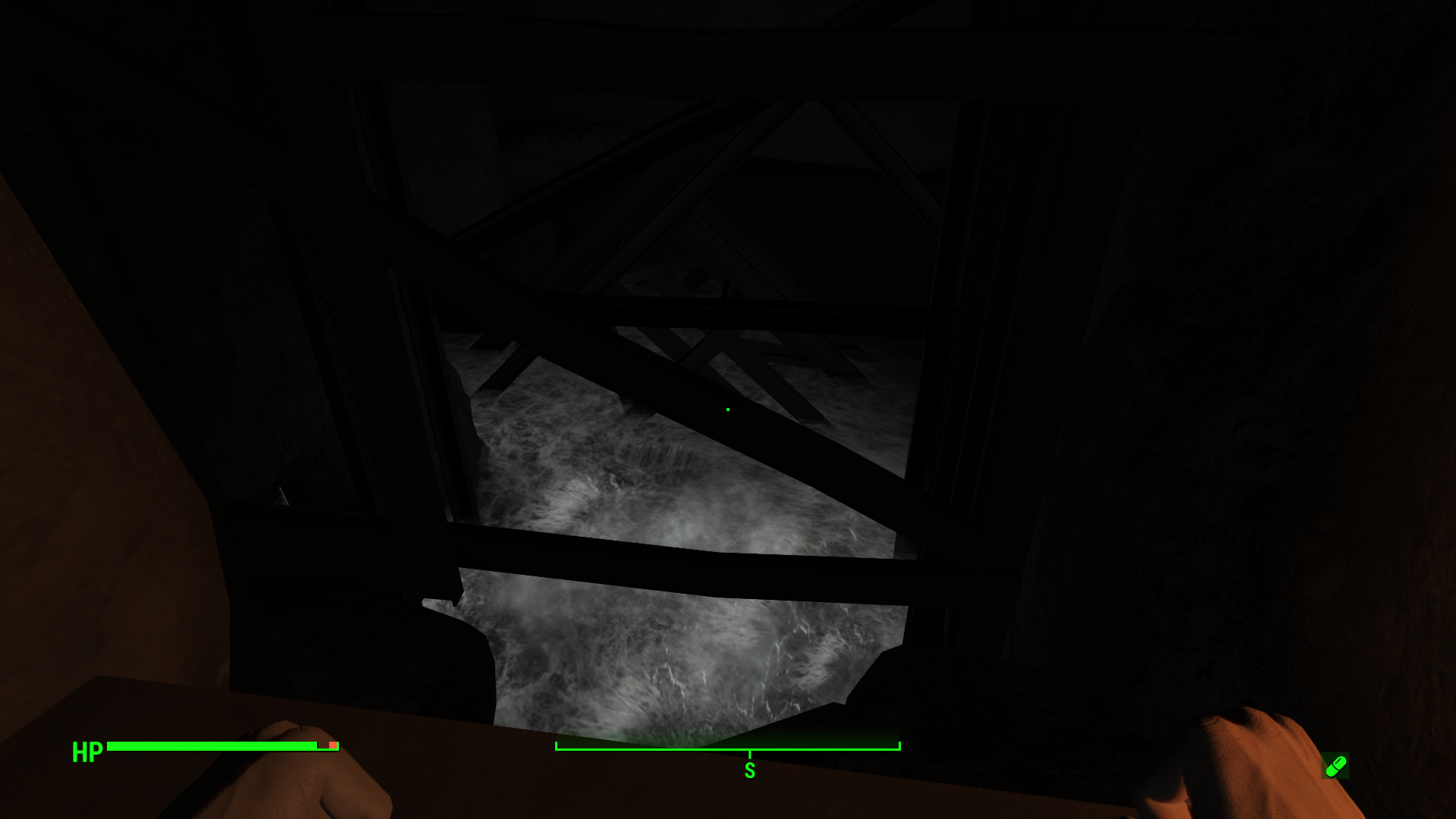 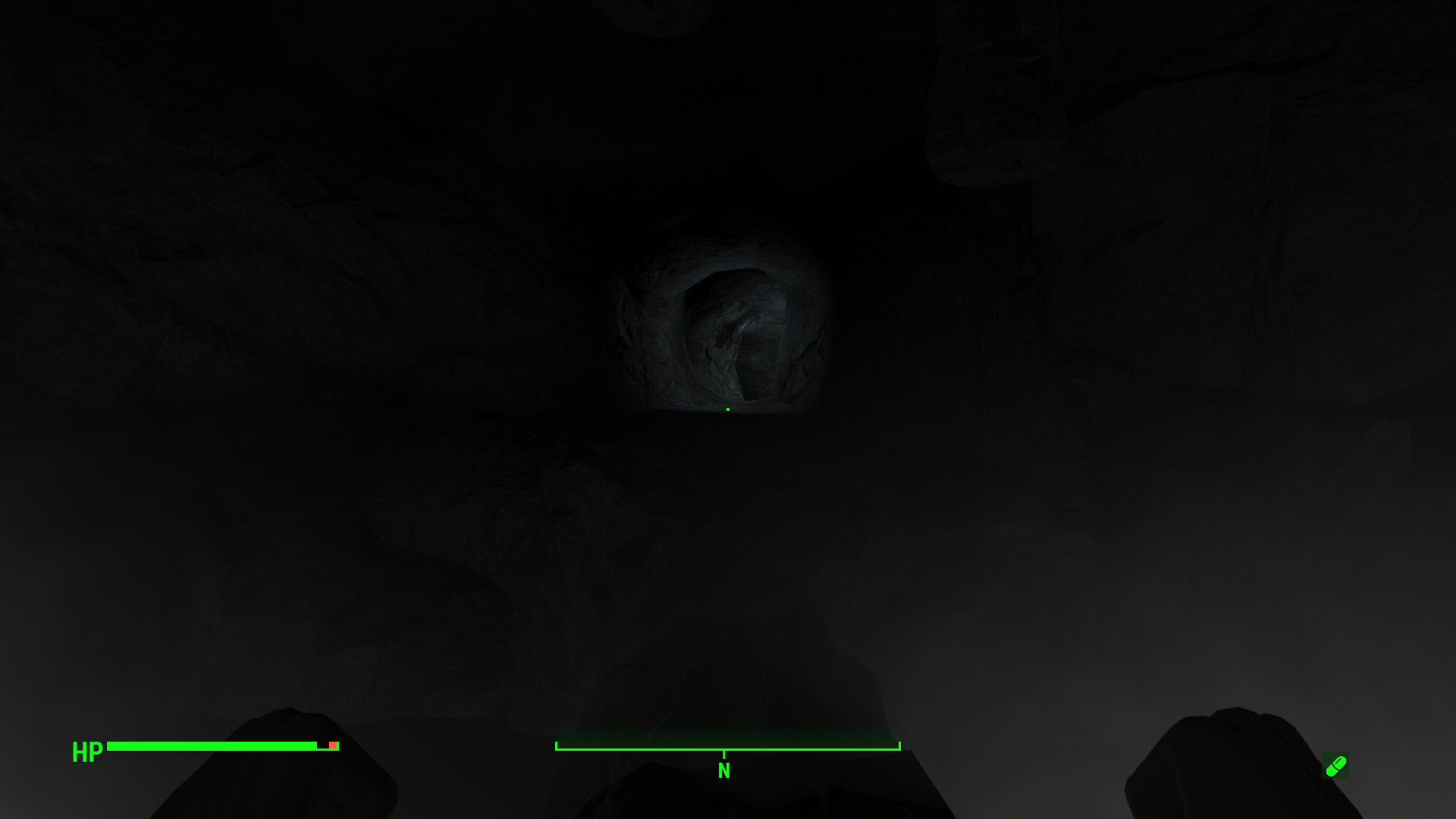 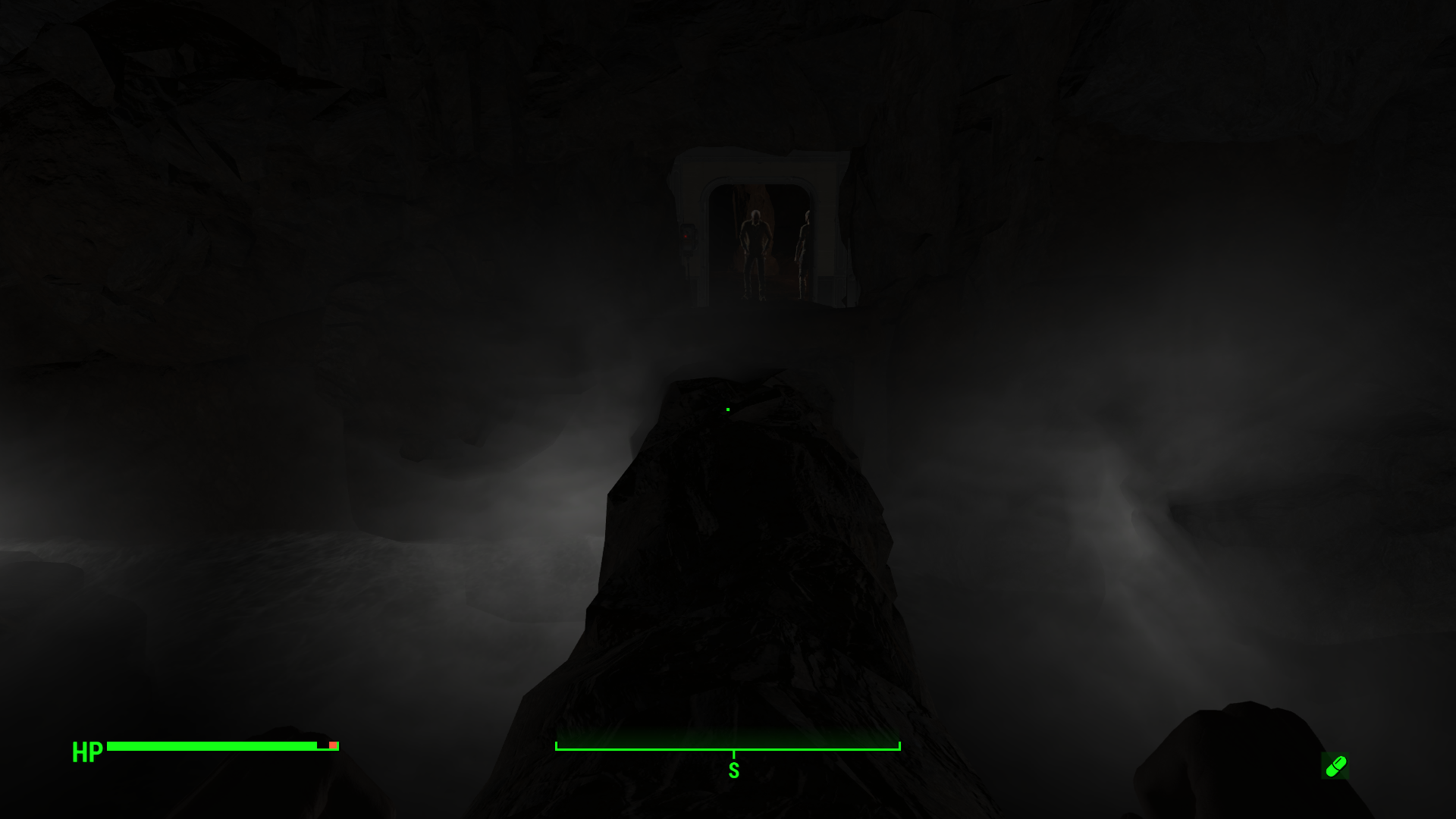